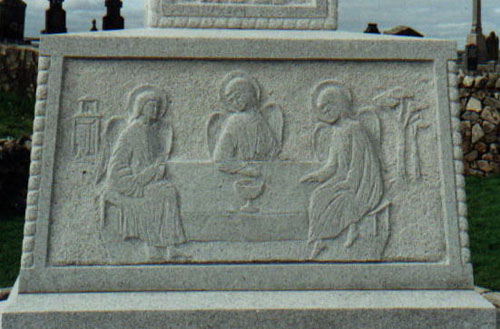 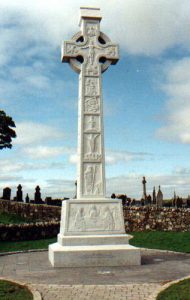 Celtic High Cross was erected at the site of St Colmcilles well. 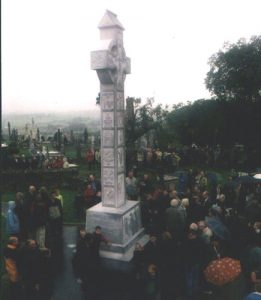 The Termonmaguric High Cross standing over 24 ft high is the Highest Celtic cross in the world. The cross was constructed and erected By Ryanstone at Ct Colmcilles well in the grounds of St Colmcilles church and was dedicated on Sunday September 10th 2000. Homily by Cardinal Sean Brady http//www.termonmaguircparish.com 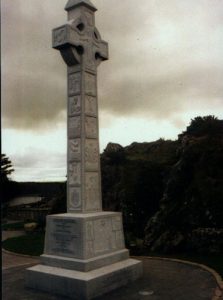 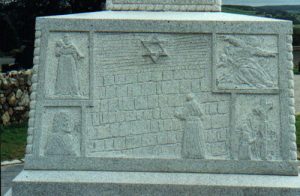 Main panel comerates Pope John Paul placing a note in the wailing wall during a visit to the Holy land.

Dean Brian Maguirc The work was commissioned by the parish of Termonmaguirc for the Jubilee year 20000. The basic cross design was done at Ryanstone and the panels were designed by Fr Sean Hegarty, Fergus O, Farrell, with inputs from Sculptor Brendan Crowe: and Stuart Logan of Ryanstone. Brendan Crowe and Stuart Logan carved the panels on the cross 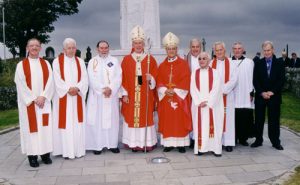 Members of the clergy with his Eminence Cardinal Brady in the centre, the Papal Nuncio to Ireland to his right, Fr Sean Hegarty (Glasses) and Paul Ryan of Ryanstone to the extreme right. 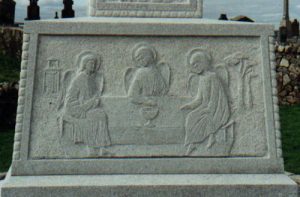 This High Cross was erected in the Parish of Termonmaguirc, Co Tyrone, to celebrate Jubilee 2000. It was blessed by Archbishop Seán Brady on Sunday, 10 September 2000. It sits in an area known as Fód na Marbh (sod of the dead) and is 24 feet high, making it the tallest Celtic Cross in Ireland.

It features scenes from the lives of Irish saints, and has a 21st century depiction of the historic moment when Pope John Paul II inserted a prayer of reconciliation into the Western Wall in Jerusalem during his pilgrimage to the Holy Land in March 2000.